More Impressions Items on Sale, and some off Sale!

It seems the list of Impressions items released earlier this week was not complete. Turning up for the first time today (7 November) are the 2014 Multisheets, consisting of four separate sheets - this year we have two portrait sheets, one landscape sheet, and a new one consisting of square shaped stamps. (The Concession Post stamps do not appear in the portrait sheets). The set of four sheets costs $89.95, and as in the past remains one of the best value Impressions items as it contains stamps to the value of $82.70. 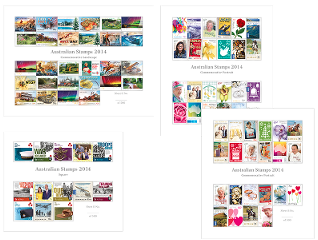 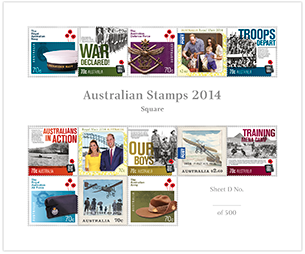 The WWI Commemorative Album is now off sale (this item has been on and off sale during the entire week). The individual Kangaroo, Koala and Kookaburra mini sheets and gold coins packs are now all on sale, but the set of three is off sale! The image of the Pinwheel pack has been modified - the write up refers to four miniature sheets, but the image has only three - a copy of the pack front has conveniently been placed where the fourth sheet would be. Finally, the imperforate sheets are now 'off sale' (they have been listed as 'out of stock', but I suspect they were placed on sale by mistake).
Posted by Chris de Haer at 12:01 AM